“How many times do you think Ryan will cry today?” Jason asked.

“I bet he’ll cry five times. How many do you think?”

“Um I think maybe only two.”

“In a massage parlour?”

“No. Loser will give the winner a massage.”

I finally pulled my ear buds out, feeling the pressure release where I had been pushing them into my inner ear to try and block out the conversation happening across the room. I pushed off of the ground with my feet, letting the chair roll backward, and I marched across the room, hoping that perhaps my anger and disgust would radiate from me, and Jason would be bottled up with all of that rage when I left. So unprofessional I thought, And Happy English was using him as an example of a good teacher! I marched down the hall, managed a curt nod to my colleague Cherry, as I swung the door open between the main hall and the lesson area. I turned into the bathroom on the right, and leaned up against the sink, staring at my enraged features in my reflection.

Sometimes it seemed like Happy English, the ESL school I was working at in China, did things a little bit backwards. I approached Candy, my supervisor, who I had already bumped heads with on a few topics, about the issue of Jason. “Yes, yes.” She’d said, but she did not appear to be paying any attention.

When I returned to my seat Damian, the newest teacher was back from his class. I tried to stuff my ear buds back into my ears before Damian could start talking to me. “Jenn! I’ve got rewards for days! What do you think!” too late.

“Uh huh, nice Damian,” I said glancing over at the bag of candies he had been giving out to his students.

“What do you think of this! It’s my next lesson plan! I mean the kids can only improve right?”

I sighed, grabbing the page he handed me, “It looks fun,” I said as I scanned through his content, “but shouldn’t you cover the lesson requirements?”

“Well they can only learn right?”

“I suppose… but how will they pass their tests?”

I turned at the sound of the door opening, my boyfriend Nate walked in, back from class, for lunch break. Nate and I went out for noodles, Damian tagged along. The noodle restaurant was owned and operated by a husband and wife pair, both of their sons worked with them in the shop. The noodles were made fresh to order. I watched one of the boys break off a big lump of dough, and pull it out until it was stretched as wide as his arms. He folded the wad of dough in half and stretched it again, and banged the long strand on the table. He continued to stretch, fold, and bang the noodles until they were long thin strands. He ripped off both ends where his hands had been holding the dough, and dumped the noodles straight into a pot of boiling water.

“What are you doing on our day off?” Nate asked Damian, we had a holiday for the Mid Autumns Festival, also known as the moon cake festival.

Damian twirled his chopsticks between his fingers, “I don’t know, maybe get some drinks with the wolf pack.”

“We were going to check out Quan Chen Square,” Nate suggested, “Want to come?” 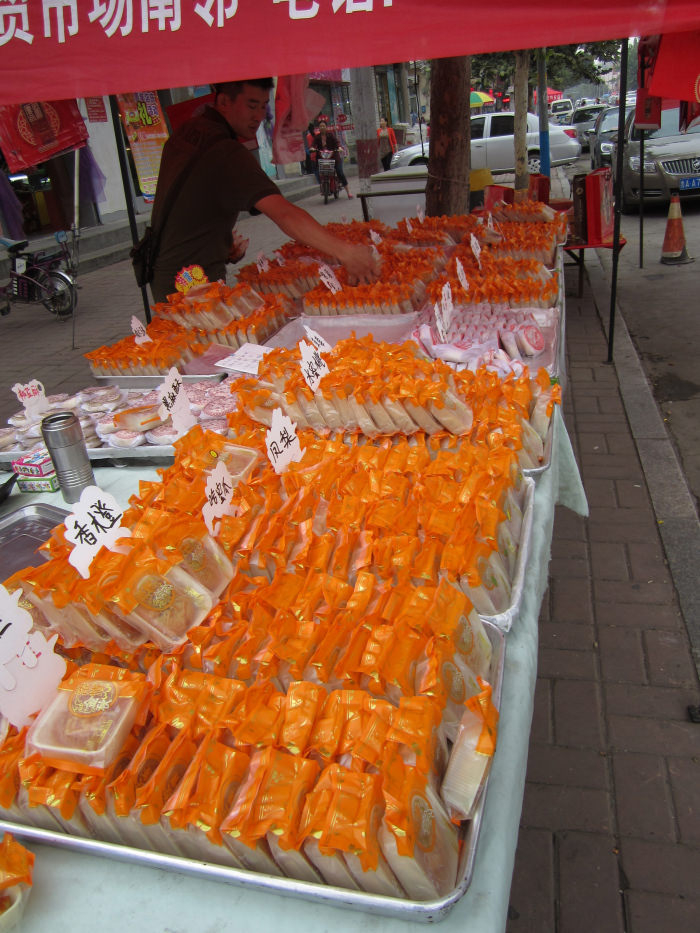 We spend the next morning splitting moon cakes, which are dense fruit or nut cakes that are made during the Mid Autumns festival. Since Nate and I could not speak enough Chinese to ask the flavours, and could not read the characters labelling the different types of moon cakes, we had to just pick some at random! Altogether we likely ate ten between the two of us, and, when I mentioned this to my colleague Katrina, she laughed and informed me that one moon cake has roughly around the same calories as a big Mac from Mcdonalds! Moon cakes, it turns out, have played an important role in China as a survival food through the winter months (hence the tradition of making them in the fall, at harvest time). Apparently you’re not supposed to eat more than one a day!

All too soon I found myself in a cab with Damian, listening to him talk about how much he liked Chinese women. Damian, who seemed to know Chinese quite well, told the driver “Quan Chen Guan Chen,” the driver replied in Chinese and Damian just kept responding “Dui Dui Dui.” and then we were on our way.

“Your Chinese is so good!” Nate complimented Damian, “What was he saying?”

“No clue,” Damian replied, “I just said dui, which means right, and he started driving!” We had to laugh and just hope we were headed in the right direction. 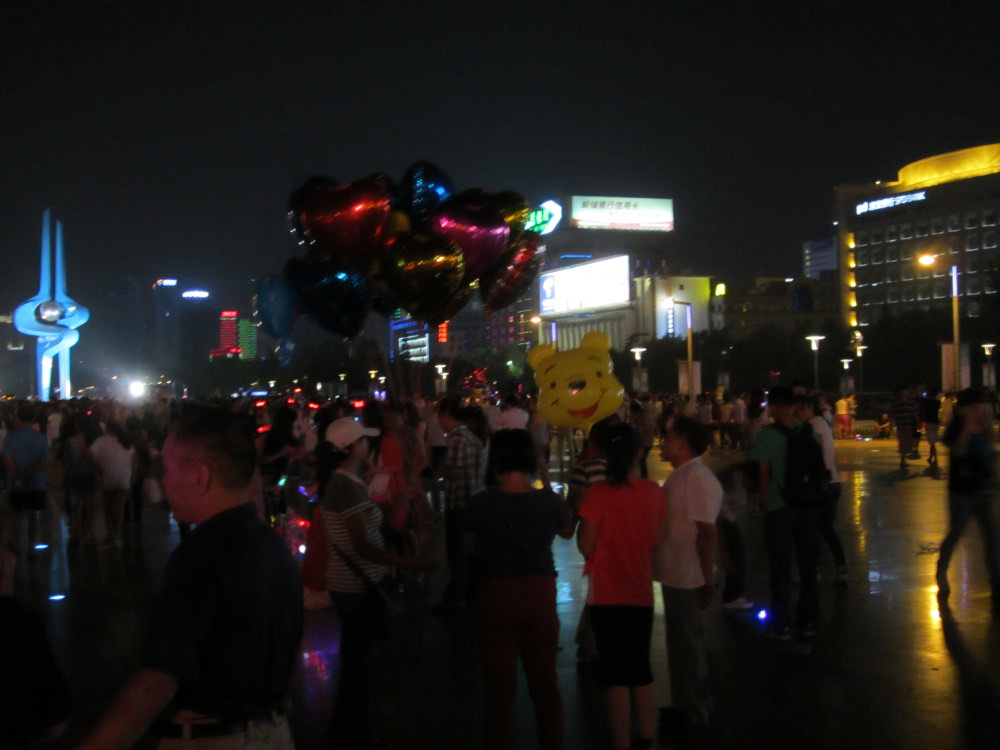 Miraculously the cab dropped us off at the right place. I stood on the sidewalk waiting for Nate and Damian to dig through their assortment of colourful bills that came in all sorts of sizes to sort out paying the drivers fee. “The small ones are like cents,” Nate said as Damian handed him his part of the bill.

“Just give him that,” Damian said.

Nate handed the mess of cash through the car window. The cab driver sorted through it, handed a few bills back, then nodded. “Xie-xie!” (thank you) Nate said.

The square ahead of me was much busier then on a normal night. Among the swarm of people were many head bands with flashing lights. There were bunny ears, cat ears, crowns, and even a Minnie Mouse bow. Above the crowd lights twirled into the air and spun back down, all across the square these little helicopters were for sale. Above the helicopters were kites, lit up from body to tail with flashing or blinking lights. 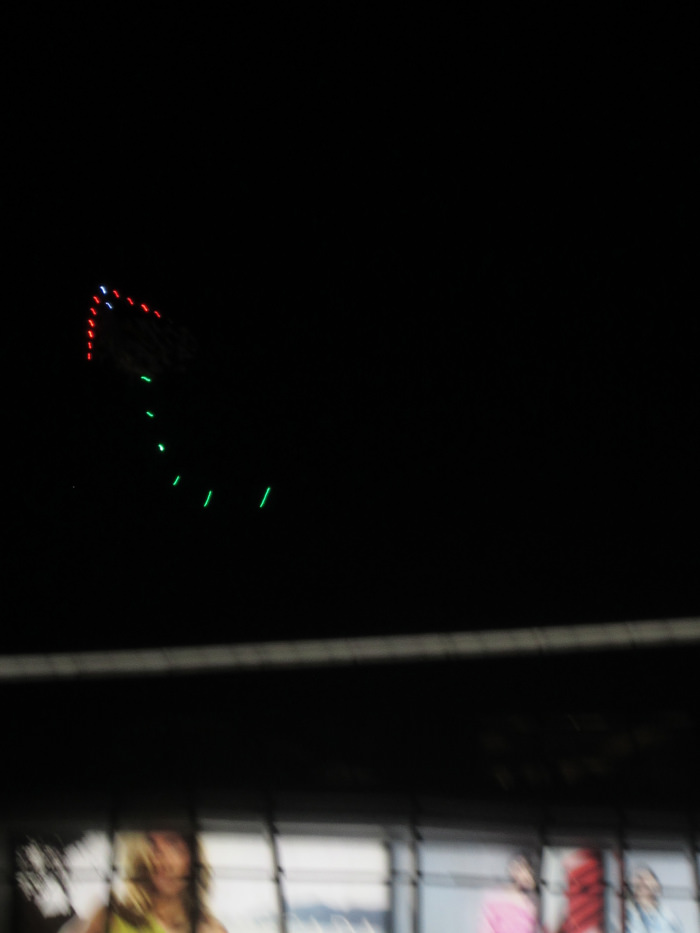 There was a hip hop competition going on at the entrance to the square, and farther in we stopped to watch a Chinese style band play. That was where we found Ray, a colleague of ours who worked at Happy English’s west center, located on the opposite side of the city. Ray stood, eyes glazed over, staring at the band. He was still there when we left. 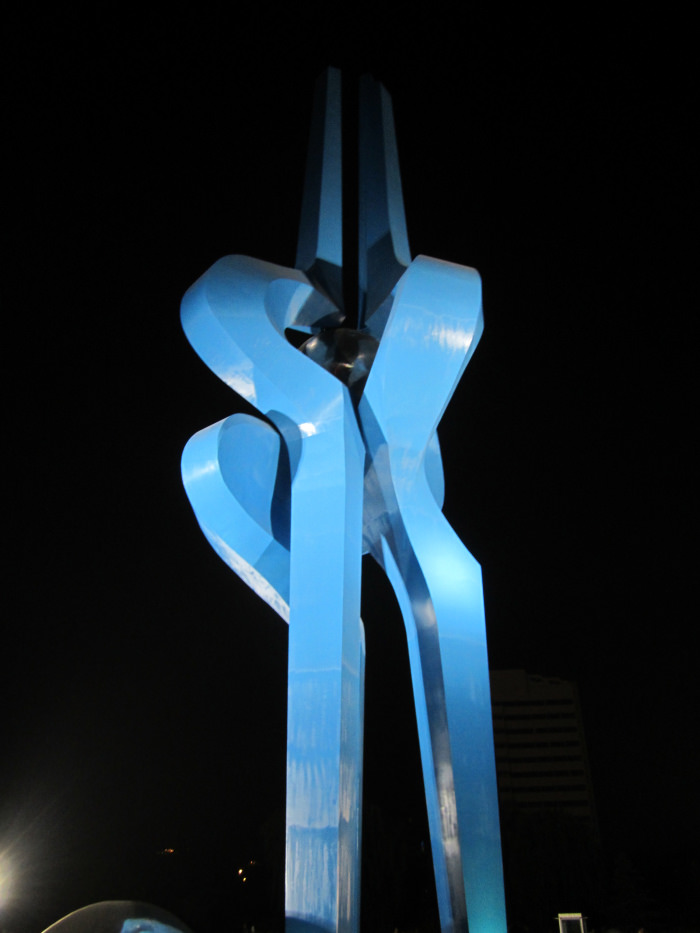 We made our way to the big blue monument that stood tall in the centre of the square. I focused my camera to get a good picture and when I turned back around Nate and Damian were surrounded in a group of Chinese girls getting their picture taken! When the girls saw me I was immediately swarmed as they asked for a picture with me as well! We got a lot of attention, especially Nate. I was glad to have him with me, as despite the thick throng of people his head of red hair towered over the sea of black hair.

Just as we were rapping up at Quan Chen square, Nate got a message from Katrina, inviting us out to a club called “Pheobes”. As we headed across the square to meet up with our other colleagues Damian rattled on about all of the girls he had gotten photos with. “I own her!” He said about the one woman, “I named her, so I own her.”

Back at home, after an interesting adventure at Pheobes, Nate and I were cuddled on the couch watching an episode of QI, a British comedy we liked “I don’t know,” I said to Nate “I think Damian’s going to be disappointed.” I was referring to Damian’s keen interest in Chinese women. He seemed to be under the impression that he was going to “get” a lot of woman while living in China. “I don’t think he realizes he left the frat house.”

* Please Note: conversations and events were reconstructed based on journal notes and memories of events. The actual wording may not be full accurate, but is written to give you a feel for the people and events that happened during our 15 month stay in China. All names of peoples, and the name of the school has been changed to protect individuals privacy, unless used with permission from individuals.