Got into the hotel around 1:00 am. Seemed all right in the lobby, but the elevator had a distinct musty smell. One wall of our room was covered in mold. It looked like a pipe had burst, or the upstairs bathroom had leaked and nothing had been cleaned up properly. It smelled of mold and must, but we were too exhausted to care. It was just a couple of day anyways.

Katrina had told us that there was some sort of club on the third floor, and we’d heard it’s music on our way past on the elevator. We thought we’d stop in for a drink to unwind before bed. The whole floor was covered in silver reflective surfaces and mirrors. It turned out to be a KTV, not a bar. We got back on the elevator amidst hellos from drunk Chinese guys.

We were woken by a loud knocking on our door, “Hello?” I called hurrying to get dressed. Nate opened the door to see a Chinese guy about half his height sporting a goatee that looked to be about fourteen years old. “Come on, hurry up, lets go!” he said beckoning to us with his hand.”

A few minutes later found us sitting in chairs in the lobby while the person who had woken us processed our passport information.

A blurry eyed, blond, messy haired young woman stumbled out of the elevator and across the lobby, and handed the Chinese guy her passport. “Where are you from?” we asked her.

“Syberia,” and then she launched into her story: “were you told 9:00am? I was told 9:00am and I was still sleeping! I was scared because I’m a girl in my own room and I have this big guy banging on my door. I though he was going to come in, but then it was this little guy.” Her accent was thick. Her name was Katria. She was never quite happy about anything, though in more of a funny way then an annoying way. She followed us around sight seeing during the trip despite all complaints, and seemed to enjoy every bit of the tour.

And then came Elly, a bouncy dark haired Indonesian with money to spare and a tendency to throw it at whoever looked her way, and of course had some commodity that she wanted. We couldn’t get a clear response to what she was doing in China. At first she said she danced at a gym, but her boss was abusive, and then she said she worked “every now and then.” she liked to skirt around the question, but Kat told us she was paid to be some rich guy’s mistress. She didn’t seem to be doing too bad off for it, and also had an endless supply of “good friends,” who were local Chinese men.

“You want to go to Sanya?” Elly asked (the touristy area of Hainan) “I have friend who said he will take us.” she laughed. We were squished in the cab, Nate in the front, Kat, Emmy, the Chinese guy, and me in the back packed into three seats. “I just met him yesterday. He said you want to go to Sanya? I take you to Sanya!”

“To Sanya? I want to go. I looked at bus it said four hours.” Kat replied.

“He said he will drive us, three hours. You want to go?”

“Three hours, yes yes I want to go. You want to go?” She turned to me. I looked at Nate.

“Yeah, maybe. We were talking about going.”

“Ok, ok, I call.” Elly dialed her friend’s number, “Ok ok, I told him four people. After this we go to Sanya.”

The cab stopped in front of another tall hotel. We got out and followed our guide to the elevator. We were led down an abandoned hall and to a partially opened door. Inside the room had been turned into an office with couches and a coffee table on one side and desks and computers on the other.

We were there for a couple hours and already I was regretting not bring a book. At least we were in interesting company. We talked to the girls as well as this Italian guy with a red shirt who told us all about the Haikou prostitutes.

There was a baby continuously going in and out, and a woman preparing chicken and vegetables. An office, nursery, and kitchen all in one. Very resourceful. No one was in a rush and the atmosphere was very chill. Very unlike efficient, but cold and impersonal Harbin. Finally we were told to “come, come” to go to the visa office. 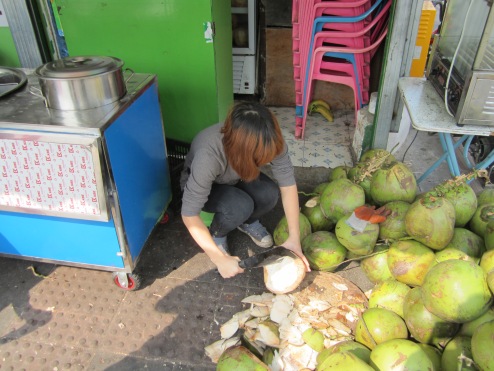 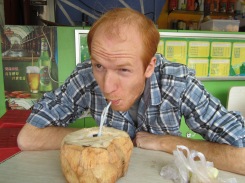 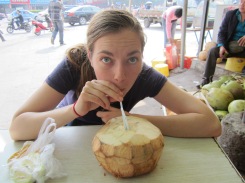 We were allowed to go, but were told to come back for 1:00pm. We ate breakfast across the street. It was chicken noodle dish with a thick gravy. Very different from Jinan food. We walked around, and bought some fresh fruit. A large pile of green coconuts at a small store on the street corner caught our attention. We ordered one and the woman that owned the store chopped a hole in the top, handed us two straws, and told us to sit down.

It was 6:00pm before we were finally done with all the visa stuff. We headed for the beach anyways (in Haikou, Sanya was out of the question at that point), though it was dark before we got there. We found a BBQ restaurant and ordered some sticks of meat.

There were some men drinking beers who had Karaoke on the go. A couple young girls showed up in very short dresses (one of them looked like it could be a little bow peep costume) and lots of make up. We wondered if they were some sort of call girl (especially after red shirt Italian guy’s talk about prostitutes). The men seemed too old for such young girls, and the girls were dressed a little to promiscuously for regular conservative Chinese girls.

We walked along the beach until we hit private property and were turned around by a security guard. The public part of the beach ended at a large opera house with a huge silver dome. We could hear the sound of a play going on inside. We poked around the gift shop where we found coconut candies, and a sea shell bracelet for Sonya. By the time we left the building the play had ended and we walked into a crowd of people scattered with men wearing green morph-suits. 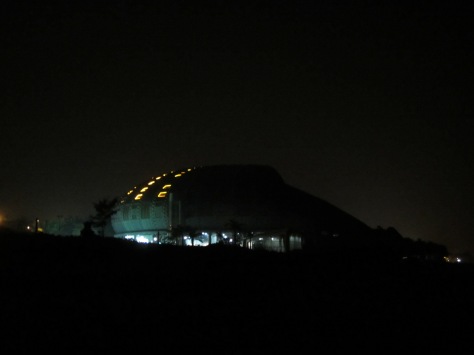 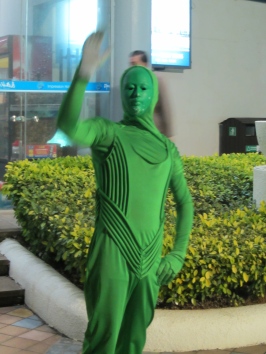 We crossed the street and walked back towards the bus stop down the palm tree lined path singing “Piano Man” at the top of our lungs, and arrived at the bus stop just in time to catch the last bus.

We met Elly and Kat at the hotel to go to the bar together. Elly had a local “friend” who knew where the good places to go were. We ended up in a small sit down bar with hanging lights.

“What do you like? The red wine?” Elly asked looking at the menu while Nate tried to figure out the dice game that was sitting on the table. A 700 yuan bottle was brought out, but she sent it back after her friend told her it wasn’t real. “Ok beer? We get the beer.” She handed the bartender a wad of cash and two big buckets of beer were placed beside our table.

Kat was complaining about the bar, “I want to go to that dancing bar, not this sitting bar, it’s so ehn.”

“Ok we drink the beer then we go to that dancing bar.” 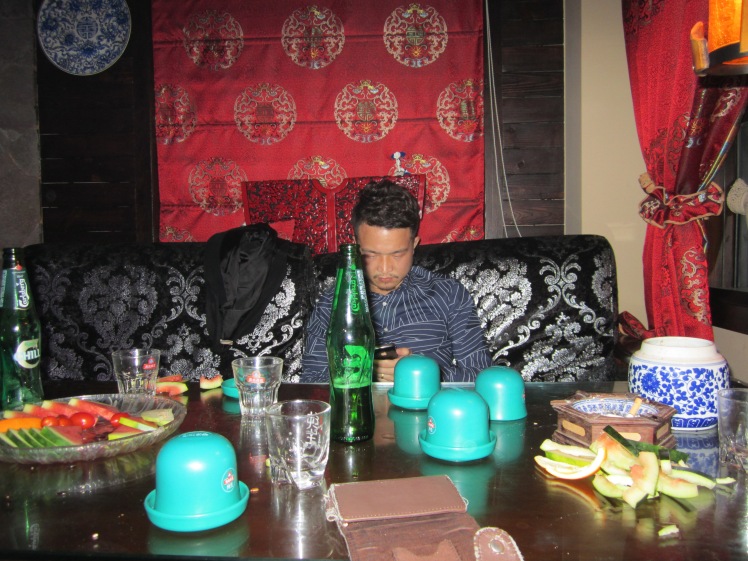 Nate was still trying to figure out the game, “Lets play, lets play.” Elly said. We made up our own rules. We’d shake the container, add the dice, whoever got the lowest number had to drink their full beer cup (size of a triple shot).

“Drink Europe drink!” Elly shouted in delight every time Katria got a low score (which was often). Katria wasn’t so into chugging.

Elly, for all her teasing wasn’t so great at the game either, “I’m so full, so full!” she kept complaining as we chanted “Come on Indonesia!”

We were trying to drink all of the beer, but every time we emptied a bucket a new one came out! Elly kept handing her drinks to her friend saying “help me!”. Katria had started calling her a “witch”, which soon turned into “witch bitch”, and then “witch bitch witch”, which became “rich witch bitch”.

At one point in the night a bunch of very drunk men from the table behind us stumbled over trying to speak English to us. One or maybe two of them fell into our table spilling half our beers. It was shortly after that that we stopped trying to drain the bottomless well of hops and booze.

We saw a couple of big rats on our walk home, and Katria flipped out! She began prancing and squealing “Rats! I don’t like rats!” she kept doing little hops as if being off the ground for that fraction of a second would keep her safe.