It is now National week, so we have no work until Saturday. We were talking about going traveling for the week, but because of lack of funds we have decided to stick around Jinan and explore the area. 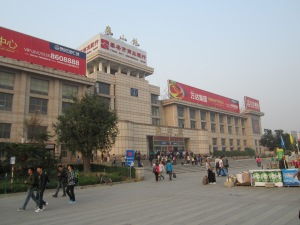 Trip number one found us reluctantly rolling out of bed at 4:00am to catch a train to Tai Shun, one of the four sacred mountains of China. We took a cab to the train station and then sat outside waiting for the others from our school that were coming with us to show up. “Hey there’s some white guys.” Nate said waving to Mike and company. They stood out well among the crowd of Chinese people. We would be traveling with Mike, Damian, Ray, and Isaac (who is our newest FT and is friends with Damian).

It was very hot in the train station as we were crammed in with many bodies and there was no circulation- the down side of traveling on a national holiday. When it came time to get on the train everyone got up at once and pushed towards the gate! We followed along at the end of the crowd. Train arrived in Tai An (as the city is called) without a problem, and we found dumplings to eat right outside the station.

We arranged for a ride with what we thought was a cab driver but turned out to be the driver of an unmarked van. The trip to the mountain cost us 50RMB which seems too high to me, but Mike worked out the cost, so we went along with it.
Mike and Damian bought some bamboo walking sticks for 2 RMB each and immediately engaged in a sword fight which amazingly lasted (on and off) throughout our entire climb they started out with a lot of energy, and by the end of the climb they only had enough energy to whack at each other every once and a while.

It cost 120RMB at the gate to enter and we bought red ribbons for good luck. Damian, Ray, and Isaac bought cowboy hats. Damian and Isaac tied their ribbons around their hats, Mike, who had no hat, tied his directly around his forehead (looked pretty funny when he took it off and was left with a red stripe around his head where the dye had run!)

Unlike the rugged gnarly footpaths I was used to from hikes in Alberta’s rocky mountains back home, the path we followed was a wide well kept trail the width of a road in some parts, made entirely out of stone steps. There were bathrooms and beer every 100m! (though the higher up you got the more the beer cost).

We came upon a giant bell that people were throwing coins at. We were told that it was good luck to hit the tiny bell in the centre of the big bell. Damian hit the bell on his third throw. We looked around and Ray was gone! “Oh no!” Mike said, “The bell made Ray disappear! Fortunately Ray showed back up claiming he had just been in the bathroom. 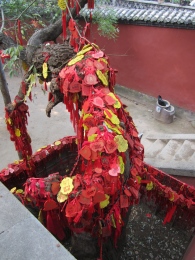 “About 100m later we stopped to check out a temple. Ray went inside while Damian and Mike sword fought (they drew a lot of attention by Chinese tourists).

After about ten minutes of waiting for Ray to return we began to get restless. We checked for him in the temple but couldn’t find him. Mike tried to call him but couldn’t get through.We set a timer saying that if we didn’t see him by the time it went off we’d go on. All sort of theories were thrown around about what had happened to Ray. He had been converted into a monk, he had been turned into the unusually large wasp on the ground that seemed to be following us, he had gotten high from the incense and was doing martial arts somewhere, he was already on top of the mountain, he had been cursed because he hadn’t bought a red ribbon… No one really knew which one was the truth. Our alarm went off so we continued on, now a group of five, each wondering who we be the next to go…

Lets play the Hello game.” Mike suggested while he was still fresh, and started saying hello to each person we passed, keeping track of the number of hellos he got back.

When he got more tired he decided he only had enough breath to say hello to the girls he passed. It was this comment that spurred the Mike Damian penis-fest. With one derogatory comment towards women after the other they quickly turned a really fun time into an extremely uncomfortable experience that made me feel disgusted and alienated. Fortunately they were very out of shape and I easily left them behind. We stopped for some food and some beers around midway up and two energetic young girls walked up to us giggling, their mom smiling at them encouragingly from a table away. They launched into a robotic spiel of well memorized English sentences grinning with pride at their chance to practice. Mike responded in front of them by saying that he wanted to have sex with their mom. At that moment I was completely and utterly done with him and disgusted. Of course Damian didn’t help as he added “Only have sex with pregnant chicks because that’s when their boobs are biggest,” so he’s on my bad list too.

From midway up to the top each flight of stairs grew steeper and steeper. There was a handle on the last stretch to hold onto as each step was tiny and the climb at that point was about as close to 90 degrees as it could get and still be climbable. Built up a good burn that’s for sure. And then there, as we half crawled up the last flight of stairs, was Ray waiting and high fiveing each of us as we collapsed on the top. 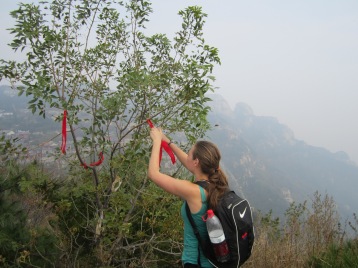 To the right was a village complete with restaurants and hotels, to the left was a quiet stretch of path and a little gazebo. We chose the gazebo first, found a tree to tie our ribbons on, and then lay down to take a much needed nap.

We bought a snack at the top of the mountain, forgoing a real meal until we reached the bottom as prices were triple. We took a cable car back down, but it only took us halfway. Nate and I decided to climb down the second half on foot, while the others paid for the bus to take them to the bottom. Suited me fine as I needed a break from Mike and Damian as I was still mad at them for the things they were staying on our way up.

We still had lots of time before our 10:00pm train back to Jinan when we reached the bottom, so we decided to walk back to the train station. We stopped in some shops, one where Nate drooled over a wooden sword that was taller then him. We came upon a giant market with all sorts of goods for sale. There was a tent full of big tapestries made from paper cuttings! They were absolutely gorgeous and we immediately wanted one. Another part of the market had gorgeous wooden furniture, similar to the stuff we found in the shop next to our school.

We bought a map and were trying to figure out our way back to the station. We stopped and asked three girls for help, but none of them spoke English. One ran up to some passing university students, who ended up walking us to where we needed to go! When we asked them if there was a good place to eat near they brought us to this store that had a make your own stir fry type situation where you picked the veggies and noodles that you wanted in it. We thanked them profusely for all of their help.

It was a long day, but the true trial came at the very end, when our cab driver dropped us off at out apartment and we had to face the five flights of stairs between us and bed!